Under the Oaks at Vero Beach

The first show of our 2015 season, "Under the Oaks" in Vero Beach, Florida, was a resounding success, thanks to the new friends we made, and the images we sent home with several happy customers. While the visitors to Vero's Riverside Park event seemed sparse, there were buyers out looking. I had some very interesting conversations with several of you, about traveling the backroads, ghost towns and photography in general. 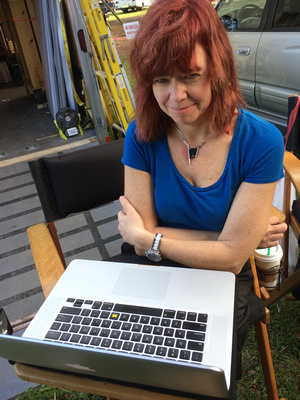 The show is easy to do, logistically. You gotta love a show that lets you park your van or trailer behind your booth. It sure makes it easy to restock inventory, or find a piece that isn't on display. And since Karyn and I hadn't done an outdoor show for several months (Michigan is just not conducive to outdoor festivals in January or February), we were a bit rusty on the details. UTO gives us the perfect opportunity to get our routines down again, and remember where we stashed that critical piece of equipment.

The show set-up is Thursday, before the show opens on Friday. Driving into the park, I was greeted by the show folks at the entrance, and given my packet with directions to my spot. I backed the trailer into position and got the canopy and walls up with only minor discomfort. Karyn was not with me for the first part of the set-up, due to a delay in her travel plans from Detroit. She usually flies in for the weekend shows, while I'm the one who moves the show trailer from city to city. This time, her flight plans had been derailed, and she planned to fly into Orlando and rent a car to meet me later in Vero Beach.

After hanging all the art on Thursday, we went to our hotel, and a pleasant romantic dinner for the two of us at Carraba's. Friday morning dawned clear and bright, and we got the display open and ready for business by 9AM. We saw the quality control volunteer and then shortly after, the judges came by to evaluate the artists for awards.

Friday we sold a few matted prints, but after about 1PM, the crowds thinned out, and by 3PM it was pretty much a ghost town. The show hours run from 9-5 both Friday and Saturday, and a very civilized 10-4 on Sunday. Friday night, the Vero Beach Art Club hosts an artists dinner at the Elks Club, catered by Scampi Grill. We enjoyed the party and the food, in the company of several artist friends. I was pleasantly surprised to win an award this year -- Second Place in the Photography/Digital/Mixed Media category. This is primarily a painter's show, and there are three separate categories for painting, while other media are lumped together in one homogenous group. Glass, Wood and Crafts are all in the "Crafty Crafters" category -- our friends Beth and Stephen Radtke won for their marvelous carved gourd work. 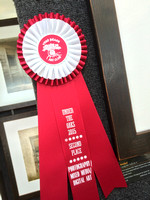 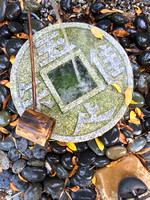 Saturday was a repeat of Friday, with a few sales of smaller matted work. We had a steady flow of customers, and lots of interest about the subject of my work. We kept busy until about 1:30, when again, it got a little too warm for folks, and the foot traffic dwindled. In Vero Beach, people like to come early before the sun heats up the path too much. It's a pleasant experience in the morning, and many people opt to come for an hour or two before the heat of the day. Saturday night, we had light snacks and cocktails at the bar at Bonefish, a favorite hangout. Then it was off to a party at one of the artist's homes in Vero. Alan and Barbara host a party for the UTO artists every year, and they have a lovely home with a secret garden. Lots of fun with friends.

Sunday we rinsed and repeated. Two very good sales, and lots of laughs with new acquaintances. I tried out my new iPad email sign-up form. I'm using Chimpadedoo, which is tied to MailChimp. It's simple to setup, but seems to suffer from a lack of visibility, since an iPad mini doesn't look like a guest book. The form is hard to see in bright light, too. Some bugs to work out, but I like the idea of letting guests type in their own email address, and once entered, the data isn't visible to other people. 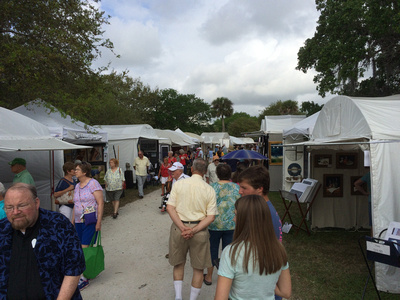 Load out was easy. The predicted rain shower came quickly and was over fast around noon, and we had dry tents by load-out time. Most everyone was gone by the time we had our work packed and reconfigured for the next show in Naples this coming weekend. I'm going to try something different at this show. More about that, later.

It's a local show that's well-supported by a well-educated older population. The work is biased towards painters, since the Vero Beach Art Club, who runs the show, is primarily an organization of painters. No photographs on canvas can be hung here, which is somewhat of an arcane rule, but it's their show. They can run it however they see fit. It has its quirks, but all in all, it's a well-run show, and easy to do. This year, sales and attendance seemed lower than in years past. You couldn't blame the weather, and we did well. All in all, we had a fun time in Vero Beach.

If you are interested in applying to the show, applications are posted to Juried Art Services in the fall preceding the show year. The show's website is http://verobeachartclub.org