In April, 2011, our art show trailer was parked at the Marriot Towne Place Suites in downtown Fort Worth. We were participating in the Main Street Fort Worth Art Festival. On Thursday night, the first day of the show, we came back to the hotel to find our trailer, “Artan” (short for Artanic), missing from the parking lot at the hotel. The trailer was reported to the police, we carried on and had a successful show, and on Sunday the trailer had not been located. The Fort Worth police said that in all likelihood the trailer had been transported to Mexico for resale. We were sad.

I rented a U-Haul and we took our tent, display panels and artwork back to Michigan. I filed a claim with State Farm, ordered a new trailer, made new artwork, and carried on. I never heard anything from the Fort Worth police about the trailer, and the claim was processed by our insurance company, checks were cut, and we were mostly whole again.

Fast forward to June 4. I am on my way back from a show in St. Louis, and I get a voicemail from a police officer in Texas.  After seven years, the trailer has been located. I kid you not. It was in Texas the whole time. I had a good conversation with the officer. Evidently the trailer was being towed by a man who claimed to have bought it for $2000. The VIN numbers had been removed, as well as all of the identifying manufacturer’s marks. The man claimed it was a “home-made” trailer, but the police, part of a Grand Theft Auto Task Force, knew better. In Texas, you don’t need a title transfer to register a trailer plate, but you do need VIN numbers. It’s illegal to remove them from a vehicle. So they confiscated the trailer, and then did some legwork. The office who called me found a partial VIN number, traced it back to the Fort Worth police report from April, 2011, and gave me a call. I corroborated some details about the trailer I had owned, and verified that it was the trailer they had in their possession. 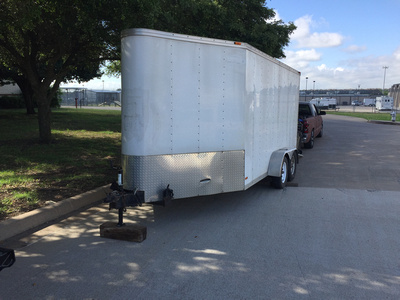 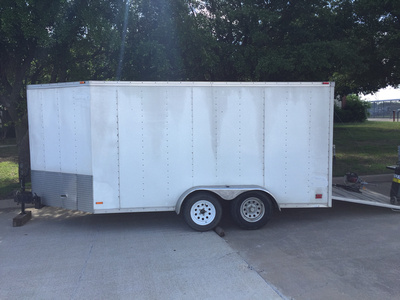 He was nice enough to send me some pictures of the trailer. Artan is in good shape for having been sold into slavery for seven years. The trailer still had the rack in the back that we used to store ProPanels; the tape from art show parking permits on the front; and the hooks for the weight-balancing rig we used with it, when we towed it with a Jeep Cherokee. It appears to have had a forklift driven through the front diamond plate, and it looks like it has a new tongue jack, but other than that, it’s pretty much the same.

Since the claim was processed by the insurance company, the trailer now belongs to them. They may auction it off to recoup some of their money, or they may not. I am amazed that it turned up after 7 years.